Time to take on a couple of topics that I never have really given much in-depth thought to in the past. Those topics are, in the order of discussion in this piece, Abortion and euthanasia.

The main reason for this entry, was a facebook meme that I came across which showed a happy father holding a severely disfigured child, with the caption “Thank you for not aborting me”. 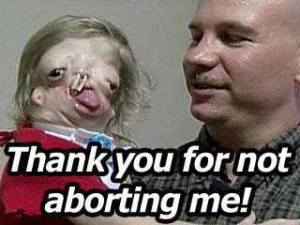 The image is indeed, not for those with delicate sensibilities, and the reactions were a mixture of amusement and disgust. The final comment of the thread (when I found it), was from a person who called all of the participants in the thread “pigs”, for being so judgmental of the child in the image. Me being the person that I am, decided that if this person thinks they get the last word, then they are wrong.

What can I say? Its how I roll. When you speak, then you better be ready to be answered to.

Though the comment may on one hand be founded, on the other, one should not just assume everyone in the previous conversation is judgemental. But calling the kettle out for how black it is, was peanuts, compared to the worst aspect of the thread.

I ended up telling her off, and did not mince words in doing so. The motivation for my anger here was not that she was calling out everyone else from a high horse. My main problem, was with the point that was missed, as per the meme itself.

Some of the commenters in the thread were amused by the image. Whatever (I would be a liar if I said that I didn’t get a chuckle out of it initially, before the message sank in). But the worst of the bunch, are those that were repulsed by the image. But the worst yet, were those that reacted, based only on the image itself, and not the message it sends. The message I think, being that it is not always noble and good, to save a life.

One of the biggest boons to having religion as one of the biggest motivators of attitudes (and by extension, laws) when it comes to subjects like abortion (other than women’s rights), is that it is not based on reality, or actual situations that many people will be facing. Most of the education such people have on the subject, is at best, 2nd hand information. In the same way that it is hard to form an educated opinion of living in Toronto when you reside in Berlin, abortion is one of those subjects that has to be in your life directly in some way, shape or form, in order to have an opinion that is TRULY educated.

But unfortunately, though the so-called “moral majority” feels educated, they are not. Even if they feel that they have done a good deed, the only deed they have done is stroke their own ego. So, you signed a bill that appeases many of your constituents, as well as your invisible sky daddy friend. Congratulations on being a good Christian. Pat yourself on the back, and wait for the perks of the all mighty’s country club!

Meanwhile, for the rest of us here on planet earth who are bound by your quick signature, we are stuck with the task of figuring out real life, around deluded assumption.

Those who are raped, and as a result have a baby, must accept the consequences of their actions. Those that are in a bad life situation and as such will not be able to give a child much of a chance, must bring the child into the situation anyway. It does not matter if there is a good chance that the child will grow up, and end up on the “bad” side of the law (as interpreted by the same conservative christians).

And last, but certainly not least, are the disfigured and suffering children, like the one in the meme. They must be born, no matter how much suffering they will endure.

By the resonating silence when it comes to the pro-life side acknowledging any of the above problems based in reality, I think it is safe to make a few assumptions.

One of course, is that many in the “moral majority” are acting out of self interest. That is quite obvious, and frankly, the least of them. If I use this writing as a reference I can think of 3:

I have painted all pro-life people with a mighty broad brush in this post, I will admit. But really, if you are REALLY as educated on the subject of abortion as you think you are, then you should have considered all (or most) of what I have outlined above.

When it comes to my views on the subject, as the bias of this piece blatantly indicates, I am pro-choice. However I did not stop at that conclusion. I am for abortion, when it comes to emergency situations. And I am in favor or it being an option, should a couple (or a single mother) find themselves with an unexpected surprise. But I do think there should be a limitation when it comes to what I will call “recreational” abortions (“Oh shit! We fucked, and now im pregnant!” abortions).

I understand that in the heat of the moment, sometimes precaution is thrown to the wind. One of the most fun things that a young (well, any) couple can do, is have sex. And sometimes it will happen whether a condom is available or not.

In fact, my joke is that if I ever find myself with a home run and no rubber, I still won’t pull out (she may get pregnant anyway, so may as well get what pleasure you can out of it).

Now, despite saying this, if someone finds them selves at accidental pregnancy #3,4,5, you have to wonder. With all the various forms of birth control available today, why still the same mistake? One can make a mistake once, twice, even 3 times. But anything over that, come on. I am not telling you not to have sex, or anything like that. More so, use your head next time you go about it.

One thing to note however, emergency abortion should not ever be counted in such a tally (though I would hope no one would ever need more than one anyway).

Now onto the subject of euthanasia. While suicide is the act of taking ones own life, euthanasia is when a 3rd party assists a person in taking their own life, as per their wishes.

Like abortion, this topic more often than not, gets voted on and collectively decided, by a majority of people with a very narrow understanding of the subject itself. And I can see how it could also be lumped into the same category as suicide.

Though this is wrong, considering that most suicides are the result of mental or emotional suffering, and of course, the people take their own lives without outside involvement.

Euthanasia on the other hand, besides being assisted by a 3rd party, is usually an option considered by people who are going though agonizing physical suffering. There is a good chance that these people would take their own lives if they could, but since they are unable, they are forced to try to find a 3rd party who is willing to grant them their wish.

But as with unthought abortion legislation and opinions, this misses the personal touch that reality beings. The world that the rest of us live in.

Lets take the view of a nurse, whose job requires her to care for many terminally ill patients. On a daily basis, this nurse encounters many people who suffer endlessly, many of whom beg her to just pull the plug already.

Given this scenario, what in your opinion, is the bigger crime?

Pulling the plug, and ending the person’s misery?

Or letting them live to suffer another day?

There is no doubt, that euthanasia would need to be heavily monitored. The decision has to be made by the person themselves, and not driven by the anterior motives of another.

After reading this post, all I ask of you, is to rethink your positions. I do not care what your favorite scripture, or mainstream society, say on the subjects. Reality does not always fit around our molded beliefs and conclusions. So instead of causing more harm by sticking to what we THINK is best, lets use reality as our reference and guide.

To not do so does not show compassion, it shows ignorance and utter selfishness.