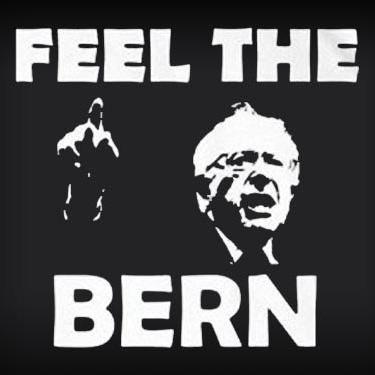 This election cycle has really been something. Hell, the past 2 really!

Reeling from almost a decade of George Bush, America decided to vote in the first minority president ever. Twice. And with his presidency rapidly approaching it’s end, we have seen even more grassroots movement, spearheaded by unlikely candidate Bernie Sanders. A man that has been in the political arena for longer than I have been alive, but also a man whom has not received the attention that he rightfully deserves. That is, until the last year or so.

His reason for drawing so many is obvious. Unlike damn near every other politician one can name, for the most part, the Bernie of today is the Bernie of yesterday. What he valued when he started out on his journey as a young ideolouge with big dreams, has mostly remained constant. Even when public opinion may lean heavily in a contrary direction, he stood his ground. As can be tracked over the years. In comparison to the swaying nature of his fellow politicians on both sides (though, some with more sway than others).

INCLUDING Donald Trump! People talk about the current democratic candidate having more sway than a palm tree in a hurricane. At least she stayed on the same side! Trump, who was once a Democrat , is now a tea party Republican.

Translation: How can I draw more of an audience? As a rich prick playing the part of Micheal Moore type? Or as a bafoonish moron without a clue or a filter?

Of course, this is assuming that Donald has the faculties to make such judgements. In all honesty, I do suspect that at least part of this is for show. He may indeed be both ignorant and stupid. But I detect a self driven media circus. All surrounding an extrovert that has never had this much attention before, and as such an extrovert that will lap it all up for as long as possible.

Moving on, I understand the Bernie draw. He represents something very different to the typical choices that Americans are used to. And really, on the heels of an Obama legacy (for better or worse), it’s unsurprising that Bernie fever gathered so much steam. Though Obama did not amount to all that many of us expected him to, he kicked open a door. He gave millennials hope. Even though the halls of power are filled with primarily baby boomers unwilling to let go of the influence they now have, Obama got in. Though he proved more alike many of them than different (unfortunately), he differed in a big way. Skin color. Whether you call him black or half black . . . Who gives a shit. He isn’t white, AND he ran the nation for a decade!

Liberal values have been on the upswing of late. Whether or not one can attribute the Obama candidacy to this I suppose is debatable. All I know is that the old guard is increasingly losing its iron grip on contemporary society, and gradually things are getting more open, more diverse, more secular. 2 issues that seemed like mountainous battles just a few years ago (gay  marriage and marijuana legalization), are now law and gaining traction. Secular voices are now also increasingly feeling more comfortable than ever before to make themselves known for where they stand.

In many respects, it really is a different world. Thanks no doubt to the great equalizer of our time, the internet.

Given this environment, it’s not really all that surprising that Bernie’s flavor (or now, brand) of politics has become so favorable. Many are tired of what the system has to offer, and want a change. And in terms of progressing forward, America has been on a role for almost a decade. So why stop now?

I can understand why after all this energy, campaigning and excitement, a Hillary victory is a bitter pill to swallow. I see why this ourcome leaves some Bernie fans opting out, some looking for life rafts in Stein, Johnson and Ventura, and others even supporting Trump (hopefully the minority). But no matter why you dislike Hillary so much, walking away from the Democrats is not a good choice. From the point of view of rationality, it’s incredibly stupid. From the point of view of politics, it’s incredibly short sighted.

Many people that were captivated by the rise of Bernie seem far to fixated on the person. I get that. It would be hard to find another such politician almost anywhere. Jack Layton (rip), former leader of Canada’s New democratic party, comes to mind). But no matter Bernie’s credentials, what is bigger than him, is the progressive movement helped bolster. That does not have to end with his campaign suspension. Rome was not built overnight. Nor was the current status quo. So one can not expect to fix it all in one night. Or one election cycle.

Now that all this energy and enthusiasm is being invested in progressive politics, it is time to look to the future. Do not stew in paralytic anger over Bernie’s defeat. Become focused on figuring out who the next Bernie could be.

The Bernie loss is not a total defeat. If he helps inspire even one or 2 progressives into running for an office, his campaign has been a success. There are a whole lot more political positions (besides presidential) in the United States, many of which have a WHOLE lot more influence over your every day life than the executive branch. So start from there.

Looking at this from a progressive point of view, I can see why Hillary leaves lots to be desired.

She seems to be a fair weather politician, saying what needs to be said to get the job. There are questions of qualifications, and of past events happening under her watch (NOT Benghazi!). Not to mention the whole dynasty thing (“Oh yay! another Clinton. . .).

But even if she is lackluster to Bernie’s strength, it is at our peril to not support her.

Maybe many have forgotten, but in tandem with the uprising in liberal values of the last 8 or so years, has been in uprising of right wing resistance to these changes. It was once called the tea party, a segment of the right wing. Now it is indistinguishable from the rest of the GOP.

At first, I (like many), didn’t take him all that seriously. Even refused to write about him (seeing him covered in excess, already). Then I realized that the prospect of a Trump presidency scared the shit out of me. After that, I begin to think (based on his past progressive stances) that he may be playing the part of a progressive Trojan horse. I even credited him at one point for blowing off an RNC debate to raise money for veterans charities.

I would later find out about controversies surrounding those donations. Not only did Trump run into controversies with the veterans charities, but with his donation habits in general. Apparently he once claimed to be a big philanthropist, donating hundreds of millions. Despite being fact checked as the least charitable billionaire in the world . To be fair, that was an online magazine article headline. But still. . .

Not that it matters much now. Even if he donated a billion dollars to every veterans charity, he would have a hard time smoothing over the Kahn mess.

As for the rest of my delusions, he MAY have some trick up his sleeve. Whether or not he is intelligent enough to pull it off is debatable. But as much as it is a hilarious thought (Donald Trump trolling the world), I certainly would not bet my life on it.

I just said “I would not bet my life on it”. Many people lately (including me, in the past) seem to be taking that statement literally. A fear that if Donald gets in the White House, it could indeed, all be over.

I have since relaxed these fears (though not entirely). I do not fear some form of tyrannical dictatorship or other extreme regression, because of Congress. If they retarded Obama for 98% of his term, they will have no trouble with Trump. As for missiles flying . . . As nuts as Trump is, I still prefer him to God sanctioned Ted Cruz (“God told me that America must  annihilate Russia and Saudi Arabia!”). As for missiles flying in the other direction . . . Who knows. He could run his mouth and say something stupid. But then again, George Bush wanted to start a crusade against terrorism, and that didn’t get the US nuked.

To make a long story short, I feel no need to use irrational reasons and fears to condemn Trump. There is a much simpler reason. The Supreme Court.

Though elections pick who sits in the legislative and executive branches, the judicial branch is entirely appointed. These positions hold an ENORMOUS amount of influence, and often come with life long terms. So someone appointed now may be influencing society for decades to come.

There is much to dislike about Hillary. But the price of the short term gratification of not supporting the evil of 2 lessers (to borrow a Micheal Moore quote), may be decades of regression. Imagine if the new Trump appointee put a stop to the marijuana legalization steamroller. Not only will there be massive economic ramifications, it will gurentee a racist and expensive drug war carried out indefinitely.

So, as much as many of us millennials have gown used to instant gratification (having been brought up in the information age), some battles can not be fought quickly. As great as Bernie V Trump would have been, even Bernie knows his realistic limitations (however imposed).

We didn’t get this cycle. But is the short period of gratification one will get from burning it all down REALLY worth possibility DECADES of problems (or worse . . .)?