Not long ago I came across this meme making the rounds on social media. I meant to cover it sooner, but now is as good a time as any. 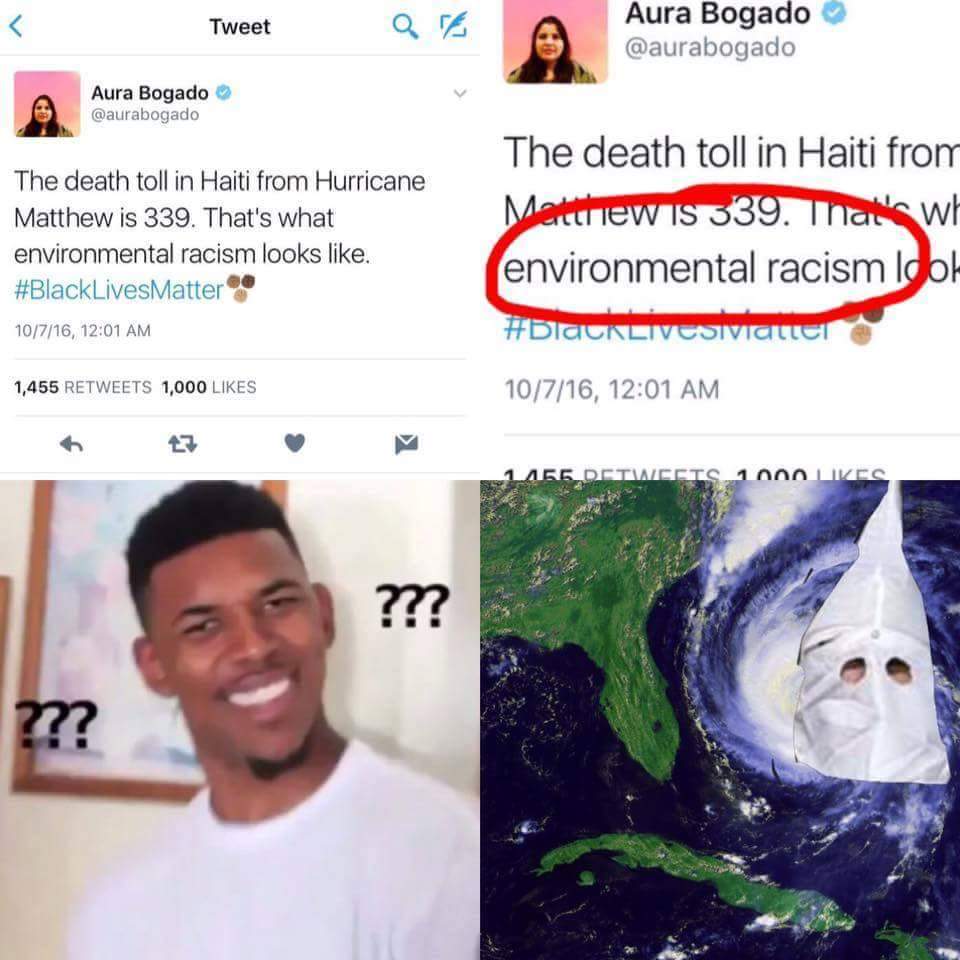 The Social Justice Warrier here is seemingly calling a storm racist. And the rest of the internet is saying “What the fuck are you talking about?!“.

At first glance, my eyebrow did go up. And that question did go though my mind. But it is possible to follow the logic, as the simpleton’s say.

One must first start with climate change. It is a phenomenon driven not soley, but arguably primarily by the west. Fossil fuels (or the harnessing of their energy potential anyway) originated in the west. And the west was responsible for a huge amount of consumption of fossil fuels. And factions of the western world are continually responsible for this status quo, despite other often less damaging options emerging.

If one looks within the power structures of the western world, you will primarily find Caucasians. Decision makers of both past and present, are primarily white. White men if one wants to be very precise, but for this  exercise, only race matters.

As a result of fossil fuels, the western world has seen great benefits. Reaped rewards never before possible in history. In fact, the bar has been set so high that it can never be reached again. This is it.

A mostly unforseen (ignored?) side affect of this binge on petroleum products is the hangover of climate change. Meteorological cycles and activities are becoming increasingly unstable with more carbon added to the atmosphere. While no area will be spared from this, right now, the most obvious symptoms of this come in the cyclones and super cyclones spawned by very warm seas. While western (or wesrern held) locations can be affected, the biggest death tolls tend to be in poor countries. Be it in the Caribbean, Latin America or around Asia. Westerners often lose buildings and possessions. But poor nations often lose entire communities.

Taking this into consideration, I can understand the basis of the tweet. Or if not, I can at least build a framework that could culminate in such a resulting tweet.

Some background into the thought processes that cullminated in the tweet would have been good to share alongside. I know its Twitter (the platform where its almost impossible to have nuanced discussion), but even so, one should know that the lowest common denominator will just assume rather than attempt to decipher. Its easier to photoshop a KKK wizard onto a hurricane than it is to stop and ponder the words beyond face value. As is the norm these days.

But despite coming up with this hypothesis of the tweet, I still think its a bit silly. Particularly without context.