After the 2016 election, though the news cycle was filled with all manner of stuff to talk about, I mostly quit commenting about American politics. It wasen’t because of a lack of opinion on the matter. It was more because I (for the most part) didn’t have anything new to add to the discourse that was not already out there. This, along with the fact that as filled and fast-moving as the news cycle of the past 4 years has been, it’s been mostly childish nonsense. That is to say, I can likely walk into any grade 3 class in North America (short of the deep south) and come across a more competent assessment of current affairs than one can garner from viewing sessions of US congress.

Take, for example, Ted Cruz. He was on Twitter shitting on California’s power grid months before his own state’s grid would prove ill-prepared for a short cold snap (AND a summer usage spike a few short months after that!).

The grid is straining as Texas attracts more residents and new companies. U.S. Census data shows Texas’s population – already second-largest only to California – rose by 16% in the last decade, more than all but three other states.

ERCOT operates the grid on a thin margin of reserve capacity of about 16%, or half the cushion of other U.S. grids. Last week, ERCOT put customers on edge when it said generator outages spiked to 11,000 megawatts, compared with a typical level of about 3,600 megawatts for this time of year.

The grid is straining as Texas attracts more residents and new companies. U.S. Census data shows Texas’s population – already second-largest only to California – rose by 16% in the last decade, more than all but three other states.

Bob Hall, a Republican Texas state senator, said the grid’s operating problems have not been fixed. “If I were a business right now, as desirable as Texas is, if I’m dependent on a steady supply of electricity, I’d be very concerned about coming here right now,” he said.

Let’s stop and talk about the politics of electricity so we can bring some context to this picture. It can be fairly easily summed up in 3 images. 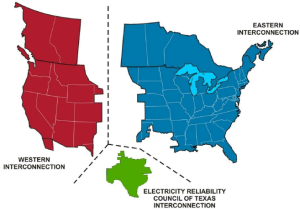 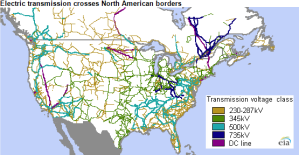 In North America, though there are a number of regional power authorities that control various geographical regions of the continent, Canada and the United States are broken up into 5 distinct interconnections (Western, Eastern, Texas, Quebec and Alaska). Of the 5, only 3 are directly interconnected (and thus, can aid in electrical distribution). The 2 outliers are Alaska (due to its location far from the rest of the southern grid) and Texas. Like Quebec, Texas maintains its own interchange for the purpose of political clout. Having their own interconnection isolates them from many regulatory standards employed by of the rest of the grid.

After all, it’s Texas! Heat and hurricanes are the main threat.

This was the reason why the Texas interchange very nearly collapsed under the strain of the February cold snap as the rest of the North American power grid was shifting energy from and too all over the continent to cover skyrocketing demand. Failing and frozen infrastructure would cripple the entire ERCOT interchange, necessitating massive load shedding (aka shedding thousands of customers worth of demand). The longevity of the cold snap resulted in billions of dollars in property damage to homes all over Texas (because much of the equipment could not be restarted due to being frozen!). While these homes will in fact be recovered by insurance (up goes the customer’s rates!), this could have all been avoided with at minimum, winterization of the grid. Joining the Eastern and Western interconnections would also be great, but not necessarily life or death.

Bob Hall, a Republican Texas state senator, said the grid’s operating problems have not been fixed. “If I were a business right now, as desirable as Texas is, if I’m dependent on a steady supply of electricity, I’d be very concerned about coming here right now,” he said.

Can you afford to shutter (and potentially sustain property damage) during what would otherwise be just a bitterly cold period in nearly any other part of the country?

With that out of the way, we can now get back on track.

The California recall election results have not yet been tabulated or released to the public — yet the leading Republican challenger in the race has already pushed discredited and errant claims of fraud in the election, disputing a loss that hasn’t even officially happened yet.

The latest aggregate of polling data compiled by FiveThirtyEight shows that current Gov. Gavin Newsom (D) is in a good place heading into recall election day, with the average of polls showing 57 percent of voters currently want him to retain his position in office. Less than 42 percent of voters support his removal.

Republican candidate Larry Elder, whom many see as the leading GOP choice to replace Newsom should he lose the confidence of voters in the recall, has so far refused to say whether he will accept the election results. Elder’s campaign, however, is already prognosticating his loss — and without evidence of any kind, they are blaming fraud for Newsom’s win.

The last time I heard the name Larry Elder was when I was listening to Dave Rubin interview him about something years ago. I think it was this interview, but it could have been before that too. It’s been years since I’ve taken Dave Rubin with any seriousness.

Either way, I wish that had been the last time I heard his name (either name, really). But that is not to be.

Instead, we all have to deal with a cringeworthy video of Dave Rubin faking (?) a hot mic reaction to Larry Elder’s loss. And we have Elder himself declaring the results of the election fraudulent before the counting of the ballets had even been completed.

While this instance of the new Republican normal from here on out (really, November of 2020 on out) is particularly idiotic in Elder’s failure to even attempt to hide the scheme that he is pulling, this is nonetheless what we now have to look forward too.

A public that has been conditioned to believe the nonsensical. And a party filled to the brim with radicals and pragmatists that are ready and willing to trade in their credibility for everlasting political clout.

On the bright side, however, now you know a little more about Texas than you did before. Knowledge to remember the next time either a cold snap or a prolonged heatwave sends ERCOT into a panic, causing much misery (if not death) for citizens caught in the crossfire of the State’s unregulated pro-business status quo.